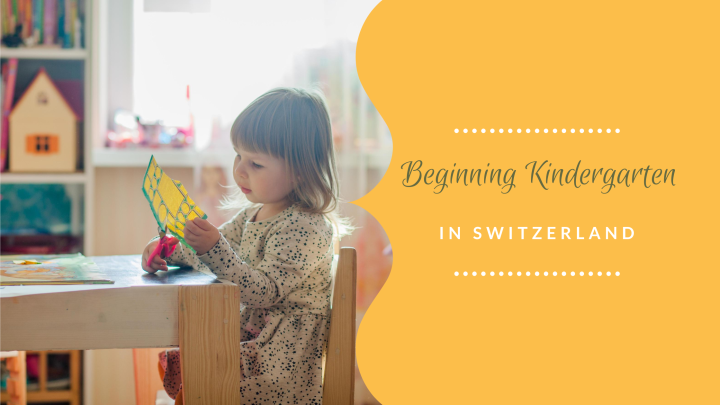 My youngest begins kindergarten next week and she’s so very excited. It’s very cute and also very contagious. Although, of course, ‘contagious’ is a word best used cautiously in these times! But nevertheless, I’m sure you know what I mean! This will be my second time at the kindergarten gates and while I do know what to expect, I have to say that I’m a little bit nervous. Suddenly it’s not just my four-year old with the big emotions, I too am feeling all the feels.

Raising children in a country when you are not very fluent in the local language is one of those adulting tasks that I never thought I’d have to do but here we are..!I’ve been asking myself, how do I approach this? Well, I’ve approached it by breaking the big task (starting kindergarten) into its smallest building blocks. Here’s what I’ve learned and here’s what I remember!

When does kindergarten begin?

In Switzerland, children begin kindergarten after their fourth birthday. The cut-off date is the 31st of July. The Swiss school year begins in the middle of August. However, some parents who are worried that their child is too young to begin school have successfully deferred a year. In order to learn more click here.

How long is the Kindergarten day?

The Kindergarten day starts between 8:00 – 8:05 and finishes between 11:50 -12.00. There is a break in between during which children are encouraged to go out and play in all kinds of weather. Thus, the formal ‘teaching’ aspect of kindergarten is only about 3.5 hours long. Traditionally, children return home for lunch. Those who are in the second year of kindergarten return in the afternoon once or twice a week. In general, children in the first year of kindergarten only have school in the morning.

Now that you have seen the hours that your child will actually be in school, it is very possible that you might begin to worry about childcare. After all, this timetable doesn’t really privilege working parents at all. Fear not. Each municipality or Schulegemeinde (as it is known in the German-speaking part) also has a comprehensive after- school club system. In order to use these services, you will have to pay extra but the tariffs are calculated against your earnings. While the system may not seem ideal (day schools are currently being piloted in different parts of the country), the system is in itself, fair. However, it is quite tricky for expat parents to accept because we aren’t necessarily used to this way of thinking or working. Recent studies have shown that women’s careers, in particular, suffer a lot due to this timetable and as mentioned above, measures are gradually being taken to address this.

The Swiss approach to Kindergarten places a child’s needs first. With respect to children of this age, it is believed that it important to encourage independence and social skills through play and being outdoors. Academia doesn’t really get introduced at this stage. Children don’t learn to read in school until Grade 1. Thus, when you open Pinterest and search for ‘Beginning Kindergarten’ there, what you will see bears almost no relevance to what happens in Switzerland! They will be taught to write and recognize their names but that’s about it for the first year.

On the German speaking side of the country, children are taught in Swiss German but it is possible that some schemes of work might be taught in High German. Children who have German as an additional language are usually pulled out of regular classes a couple of times a well and taught German, in small groups, by a specialized teacher (DaZ).

I’ve been poring over the timetables this week. That’s usually a good place to start! Everyone whose child is starting kindergarten should already have received a timetable clearly marked with what equipment children are going to need when.

The good news is that there isn’t really much in the way of equipment! There’s no uniform and children do not need to take expensive bags and pencil cases for the first two years. You know those big bulky bags that you see children carry are a Grade 1 rite of passage and are called schultheks. We’ll cross that bridge later!

In kindergarten, they simply require a little snack bag otherwise known as znünitächli and filled with a small nutritious snack. It is common, in Switzerland, to see children carry traditional satchels to school (their znünitächli). They are cute and have lovely painted designs on the front. However, it is also common to see children carry backpacks as well. My personal favorite are the light backpacks with a chest clip as I feel like they could easily do double duty on the waldtag (forest day) as well.

Children also wear indoor shoes inside the school premises. These are called finken and they are left at school (and sent home at the end of the year).

On particular days, children will need to take their gym kit (including gym shoes) to school and on other days, they will need to come prepared to go for walks in the forest, come rain or shine. Having waterproof trousers, jackets and a pair of wellies is always a good idea. Some teachers will also specify that they need you to provide a painting smock.

In addition, I usually find that it’s a wise idea to also keep a spare set of clothes in a drawstring bag in school, just in case, because accidents happen. Our son’s teacher was adamant that we all did this because she wanted children to feel comfortable and unembarrassed. This may vary from one teacher to the next so it’s best to ask!

The Schulweg or ‘the way to school’ in Switzerland is probably the most dramatic departure to what many of us we are used to in our home countries. Children here are encouraged to walk to school by themselves, within reason. Seeing four year olds trot off to school by themselves or in little friendship groups is a common sight here but, it isn’t actually compulsory. Swiss iterations of Mrs Trunchbull don’t bully parents into making their children walk to school independently if they are fundamentally uncomfortable with it. In fact, in our Gemeinde, the school encourages parents to take turns in shepherding children to and fro because the schulweg runs past a busy motorway.

When my youngest joins Kindergarten next week, I’ll be doing what I did with my eldest. On the days that she will not go to Hort, I’ll pick her up and let her walk ahead with her newly-minted friends as I straggle along behind. It’s not just because I don’t want to cramp her style but actually, it is! I don’t want to get in the way of my daughter being able to forge friendships because that’s also what school is about: for ‘socialization’.

On the first day of kindergarten, children are given a fluorescent vest to wear on the school run or a safety garland in the shape of a ‘V’. This is supposed to help motorists and cyclists see the children more clearly. Each year, before school starts, the Stadt authorities also put up billboards warning that children are returning to school and that they should keep an eye out for ‘surprises’. All children undergo a road safety training, by the police, in the first weeks of the academic year.

This whole process is designed to encourage independence as well higher order skills such as executive functioning. So, you see, children are learning, they are just learning in a different way to the ways which many of us are used to.

Do be aware that many kindergartens prefer children to walk rather than ride on their scooter or cycle. It’s probably best to avoid writing cheques you can’t cash on this front! We are also told to avoid dropping children off in cars because that doesn’t teach the right lessons. I do see their point and I do find myself agreeing.

Your little kindergartener will be taught in a mixed-age, mixed-ability class. Those in the first year of kindergarten and those in the second, are taught to together. In the second year, as mentioned above, kindergarteners are asked to return in the afternoon where they are taught separately. It is usually the case that there is one teacher for all of the children with the possibility of an additional assistant if it’s a larger group. However, the groups don’t tend to be very large here. Most kindergartens have a upper-limit of approximately 25 children per class but the number in reality is usually much lower. The mixed-ages lead to greater social confidence as well as responsibility.

Should ugly issues like bullying raise their head, do not be afraid to advocate firmly for your child. It has generally been my experience that most adults are reasonable! You also have access to a school counselor through the municipality so you should not feel that you have to fight this on your own.

Circle time in the morning usually sets the tone for the day. Children are expected to be focused and concentrating through this and that is one of the first things that they will learn. Throughout the day, the children will learn through role-play, reading together, making music, doing experiments and lots, and lots, and LOTS of crafts (get ready!). In the middle, there will be a time for outdoor play and snacks (Znüni).

Removed from traditional academia, the kindergarten experience here in Switzerland is all about learning to learn. The onus is on cognitive readiness and emotional maturity above all else.

Are you enjoying our content? We would love to hear your opinions in the comments sections. Stay tuned for more resources, our editorial panel is talking about – summer vacation ideas, mental health, nutrition, and wellness, back to school, recipes, and activities for children. Stay well and stay with us!

Get in touch with me: About Me I Work With Me 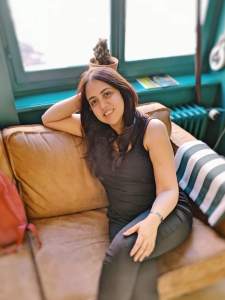 My name is Pragati, an Indian Expat based in Switzerland and the founder of this website. My Swiss Story is a digital magazine which talks about expat living, women empowerment, travel, parenting, careers, mental health issues, home, nutrition, and more.